Once again this month I have been concentrating on creating any cards that take my fancy, and not for a specific Challenge.   The cards have been created with anything I had on my desk (usually something I was meant to be putting away!) or just because I felt like it!

So be warned this is a long photo heavy post...

As today is also a Wednesday, Happy Whats On Your Workdesk Wednesday to everyone to :)

Today I am working on my Christmas cards, well on the toppers to be more acurate.  I tend to create two types of Christmas Card for my friends & Family.  The ones that look good, but are quick & simple to make & those that also look good, but take longer to make are are more detailed.

The more detailed cards will go to those who I know will appreicate a great look hand made Christmas Card.

I decided that I would use one of the stamp sets I brought a couple of weekends ago and that the main image will be the card toppers... 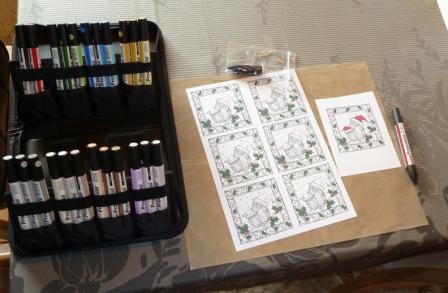 I am using a corner of table with a piece of craft sheet under my images as I colour them just to make sure that no colour reaches the tablecloth. 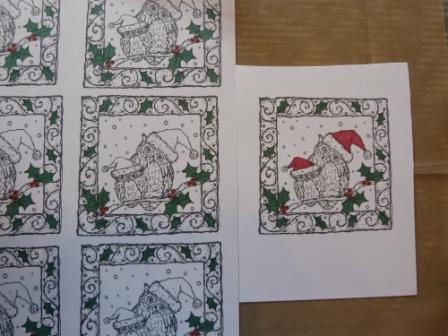 Here is a closeup of the image, at the moment I have 7 images on the go (production style), the owls will be in shades of Brown or Grey. I have finsihed a couple and are really pleased with the results.  As soon as I have a picture of a finished card I will add it to my blog.
Posted by Helen T at 07:15 12 comments:

My Nephew ('L') loves Pirates, so when we knew that we would be visiting him, DH & I started to collect Pirate Treasure. In our world this was things like the Lego figures, small toys & Super Hero pants/socks, to 'L' this all equals Treasure.

His mum had told him that DH & I had found some Pirate Treasure and that we would be bringing it with us.  As the Treasure came from Pirates, I decided that I had to create a 'Treasure Hunt' just for 'L' :)

So I set to work creating something that I hoped he would find fun.  I found a set of Pirate Stamps created by Woodware and these formed the basis of the whole treasure hunt.  I punched out lots of white card circles using a 1 3/4" circle punch, I then stamped one of the pirate images from the stamp set onto the circle.  I finished each by using the Antique Linen distress ink around the edges of each circle. 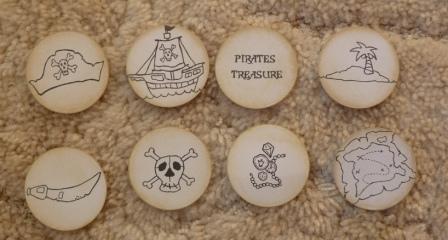 The Pirate Discs were used to let 'L' know where to find a piece of treasure.﻿﻿﻿﻿

﻿ However, the Pirates did not leave treasure every day... sometimes they left 'L' a task.  One day he found his drawing pad alongside a Pirate Disc... 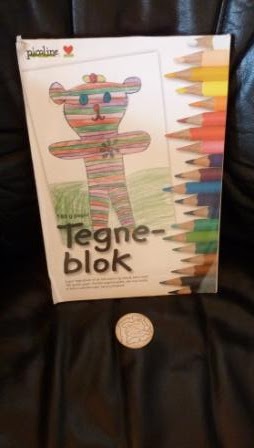 On one of the pages the Pirates had left some pictures for him to colour, provided this was done they promised to return the next day to leave some more treasure.

It really was nice to find that something so simple was able to keep 'L' entertained for quite a few hours during our visit.
Posted by Helen T at 12:05 No comments:

US... The early years

This is the title of a double layout created for my "Book of Me" scrapbook.  I wanted to record our journey together, what happened and when, this was going to be a mainly text based page, with just a couple of small photos.

It took me a long while to get the dates together, at the time (back in 1997 & 1998) DH was using Lotus 123 and not Microsoft Office, so all of the calendar info I knew we kept was in a format we could no long read.  However we found a way to view the Text version of the calendar entries... I then had to look at each text entry, I then decided to transfer them all to our Google Calendar.

This done I could then start to decide which dates/events I wanted to use.  My last job was to find a few photos of us taken in 1997/8.

Here are the finished pages... 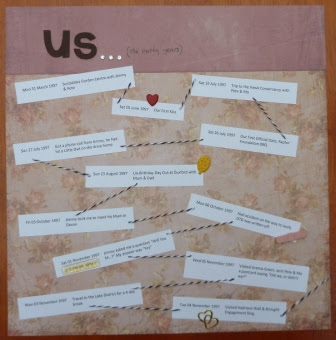 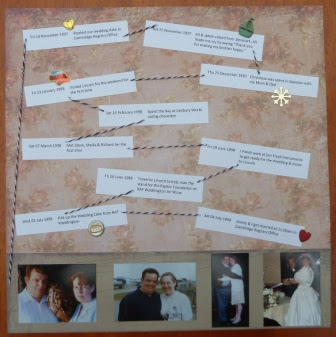 Last week at our local crop I was able to completed 1 layout and make a start on another one. Both are for my Book of Me.

The first takes me back to when I was 12/13 years old and features a computer game... you know you are getting old when you find computer games you played as a kid in a Museum!! 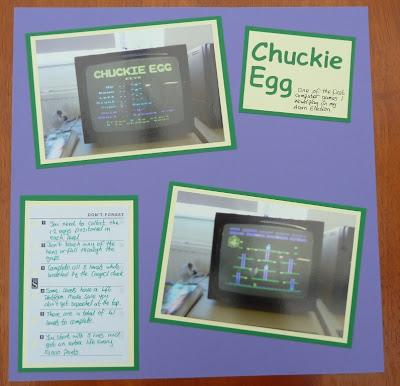 Does anyone else remember "Chuckie Egg"?

Once I have finished the 2nd layout I will post that too.

Happy Crafting.
Posted by Helen T at 13:11 No comments:

I can't believe it is Wednesday so soon, & that I missed last WOYWW last week... where is the time going to.

This week has been a bit mad and not enough hours in the day, but I have managed to do a bit of crafting, however you will just have to wait for some pictures as I don't want to show my nephew's card just yet.

So onto my workdesk, not that you can really see the desk this week!  On Sunday I visited the Simply Yours fair at Lincoln Showground, and although I did not get everything I had on my shopping list, I did find several bits that I just HAD to have (if you know what I mean)! 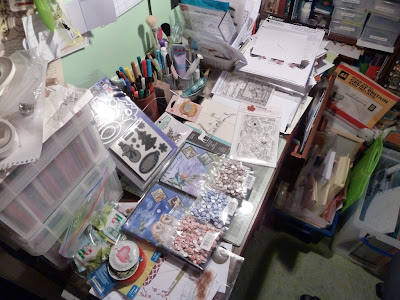 Of the bits on the desk here are my highlights...

I just hope I get time soon to have a play with my new goodies.  I also have plans to create another couple of photo tutorials, so keep an eye out for them in the near future.

BTW - I'm sorry if there are any daft spelling mistakes in this post... our keyboard died and we brought a new one, but I am sure the some of the keys are in the wrong places!!!  At least I know that the backspace key works ok LOL!

It has been a while since I have joined Whats On Your Workdesk Wednesday, but this week I decided to make an effort.

Sitting on my desk this week are 3 layouts waiting to be put away in my scrapbook albums.  They were all created last week at a local Crop.
﻿ ﻿

Wishing everyone a Happy Wednesday :)
Posted by Helen T at 12:43 7 comments:

Helen T
Lincoln, Lincolnshire, United Kingdom
Hi my name is Helen, I have been an Independent Stampin' Up! Demonstrator since January 2014 & just love their products.